Sake It To Me, Baby! 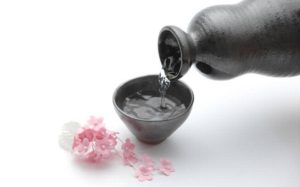 When having sushi, we are often handed a Sake menu with strange Japanese words and descriptions of elegant flavors.  But how is Sake made and how do you pick one for yourself and your guests?

Sake is an alcoholic beverage made by fermenting rice.  That’s the simple definition, but Sake is hugely complex and steeped in thousands of years of history and tradition in Japan.

The Sake maker starts with the selection of the rice and while not as defined outside of Japan as grape growing, they have a keen knowledge of the preferred rice, the growing conditions and the implications for the brewing and flavor.  Each maker will have a preferred strain and growing area as they have refined this selection to give them the house style they want.

Many of the villages with smaller Sake houses have an annual cycle of growing the rice from spring to Fall and then working in the Sake house from October to April to make the Sake.  They are housed in dorms and rarely see their families for this period.  It is a hard life and a true commitment to the art of Sake. I am going to focus on these more boutique firms rather than the large scale producers.

Once the rice is selected, they mill away the outer surface of the rice removing proteins and impurities that might impact the final flavors.  This leaves a pure kernel of rice carbohydrates – the heart of the rice.  The more that is milled away, the purer the rice is considered and the higher grade Sake it can make.  The highest grades of Sake will have 50% or less of the original weight left after the outer layers are removed.  The cheapest might have 80% left.

They then wash, soak and steam the rice to bring it to a condition for the next step.  This is an art and a science and the hydration of rice isn’t always the same since it’s an organic and variable product and yet the Sake maker wants to end at exactly the same state.  Once properly cleaned and treated, it is ready for fermentation.

Sake production is more like beer production in that the rice starch cannot be fermented, just like Hops used for beer.  This means the rice starch has to be broken down into sugars for fermentation.  This is done by applying a mold called Koji-kin and allowing the mold to break down the rice over a 48-60 hour process  During this time, the Koji-rice is put in a stack of trays and is monitored and the rice trays moved around to maintain an even temperature.

The yeast starter is developed in parallel over a few weeks and then the yeast starter, the Koji rice, water and additional steamed rice is combined over a number of days to create the batch.  This is a parallel fermentation where the mold is breaking down the rice starch and the yeast is breaking down the sugars created into alcohol.  Needless to say – it’s complex and requires constant monitoring.  This fermentation yields some of the highest alcohol contents available without addition or distillation – usually 15-20%.

Once the fermentation is complete, the mix is carefully pressed, filtered, pasteurized and bottled.  Sake doesn’t benefit from additional age, so it is transported and consumed fairly quickly.

The process above has been simplified for clarity, but there are hundreds of smaller variations taken by each Sake house.  And this yields hundreds or perhaps thousands of different variations on this beverage.

But let’s make this simple.  The best Sake for purity is called Junmaishu.  That means that nothing is used in the production except rice, water, Koji-kin mold and yeast.  This is similar to the German beer purity laws.  They tends to be a bit more expensive, but just look for that word and your price point and you should be good.  In my experience, these Sakes have the elegance and purity that you want in a Sake and pairs amazingly with Japanese food of all types.

The other fun option would be to order a Sake that has Tokubetsu in front of the Junmaishu.  That word means “special”.  It is unclear what makes the Sake special; it could be the type of rice, the fermentation or the amount milled away and the bottle might not say, although the menu should.  But somehow the Sake maker wanted to express a particular trait in their Sake and that’s how they designate it.

Oh, and most Sake is meant to be enjoyed slightly chilled when consumed.  This brings out the flavors and doesn’t volatilize the important elements the Sake maker took care to develop.  Have yours cold, like the pros.

Next time you are handed the Sake menu, look for Junmaishu or Tokubetsu and you should be okay.  In a pinch, grab the owner since he is likely to have tasted all the Sakes and be able to help you find a great one.